DALLAS, TEXAS, February 5th — During the Dallas red-carpet premiere screening of the first feature film of the franchise, MONOCHROME: THE CHROMISM, filmmakers Kodi Zene and Lozen Fükem announced their plans to expand the black and white world of MONOCHROME across mediums and begin production on a comic series spin-off.

The comic series title, “MONOCHROME: THE DARK YEAR”, was also revealed during the March 2019, premiere Q&A, which resulted in applause and cheering from the eager audience. The series story picks up where the first film leaves off, with new and original characters from the film in the potential wake of the world at war and collapse of society as we know it. All taking place while these fugitive individuals known has “Hues” (those who are now in “color” in this black and white world), struggle for their survival and freedom.

TEMPEST STUDIOS, creative company of the MONOCHROME franchise, has enlisted the services of talented artists, Kayro Rocha and Leco, to help bring to life the artwork for the comic series. Rocha, Leco and the TEMPEST filmmakers began production on THE DARK YEAR during December of 2020. For Kayro’s work visit: kayro.artstation.com. For Leco’s work visit behance.net/leandrovagner.

THE DARK YEAR synopsis: Society is falling apart in the midst of the Hue virus outbreak. While the world crumbles, Victoria Clarke struggles to cope with the new normal… hide or be captured. Desperately searching for those she cares about from before, she must do what she can to survive while unraveling the mystery of the Hues and the company who hunts them.

MONOCHROME is a multi-faceted black and white world where the audience is submerged into the implications that ensue when society sees color for the first time as individuals, they outcast and label as “Hues“.

TEMPEST STUDIOS is a full-service, creative solution company that specializes in design, video, marketing and printing for companies and creatives across the globe.

If you would like more information, please visit, theDARKYEARcomic.com or email Kodi Zene at, kodi@monochromeworld.com. 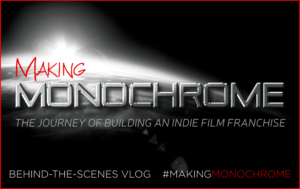