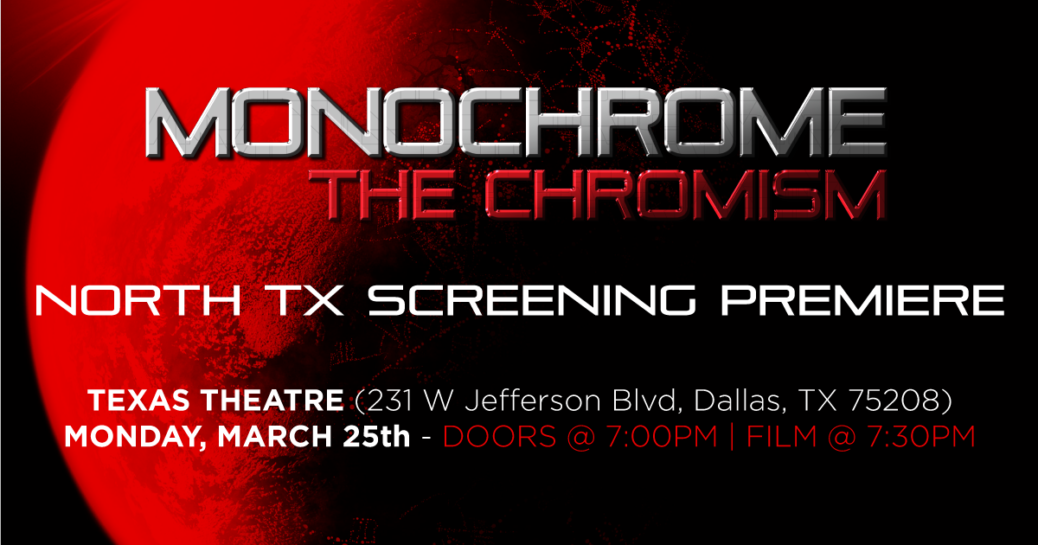 Indie Sci-Fi Film, MONOCHROME: THE CHROMISM, is a Labor of Love for Texan Filmmakers

Dallas, TX February 8, 2019 – After years of hard work making their concepts a reality, the Dallas filmmakers of independent sci-fi film, MONOCHROME: THE CHROMISM, are proud to premiere their feature film on March 25that historic Texas Theatre. The trailer has already won 10 awards including a platinum Hermes Creative Award and “Best Trailer” at the Los Angeles Independent Film Festival Awards (LAIFFA).

MONOCHROME is a black and white dystopian film where the world sees color for the first time. Those who turn color are labeled “Hues” and are outcast from society. THE CHROMISM is the first feature film in the series and the origin story of the world of MONOCHROME. The film follows Isaac Ward (the first Hue) and his attempt to make sense of these new developments and his struggle to survive. Future sequels are already planned.

The film is a labor of love for Kodi Zene (Writer/Director) and Lozen Fükem (Producer) and the public release of the feature is a milestone for the pair. From the time of the original concept seven years ago, the team has spent countless hours making the film a reality. They started with an idea, filmed a teaser trailer, attending various conferences with their printed materials in a little spray-painted garden wagon until they built up enough capital and interest to make the feature film. The film was filmed in Texas and sticking with the theme of the film, includes all local actors with diverse race, sexual preference and religious backgrounds. The film stars Josh Bangle, Cat Merritt, Devin Leigh, Ryan Barnes, Andre Pelzer and Shashana Pearson.

A majority of the cast and crew will be in attendance at the red-carpet premiere, with a Q&A session, video reaction booth, and merchandise for sale after the screening.

Tickets can be purchased at: http://bit.ly/monoNTXpremiere

The trailer can be viewed here: www.monochromemovie.com

“We get to share our cast and crew’s hard work to our already thriving and loving fan base that’s been with us over the last 7 years. Their commitment [to the project] astounds me.” -Producer, Lozen Fükem